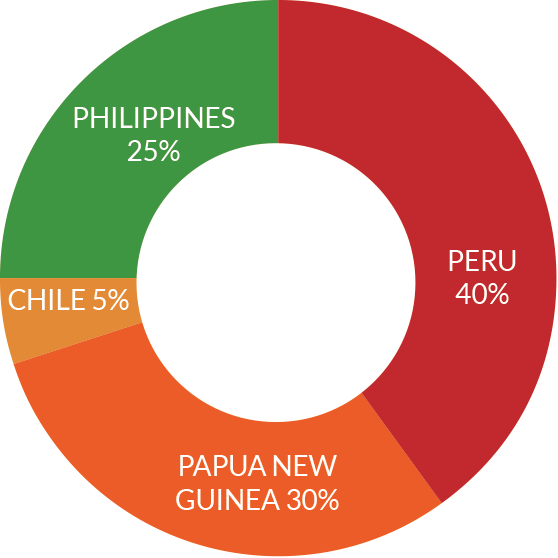 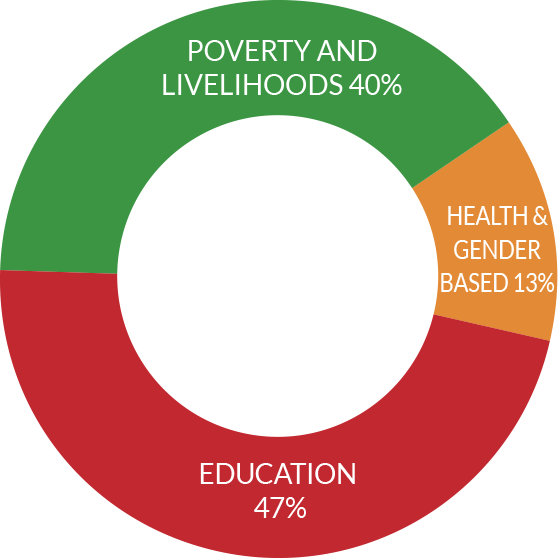 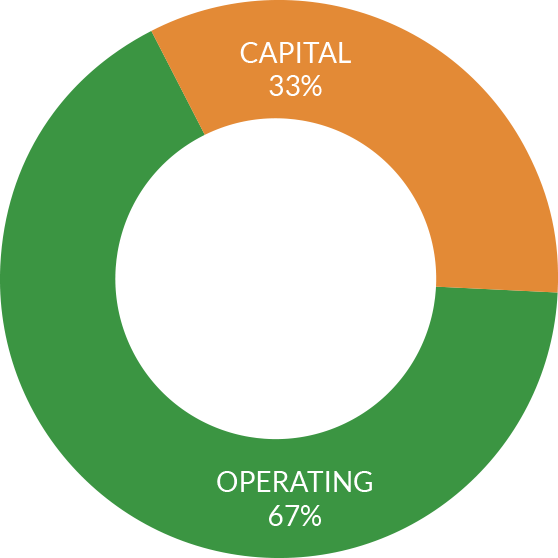 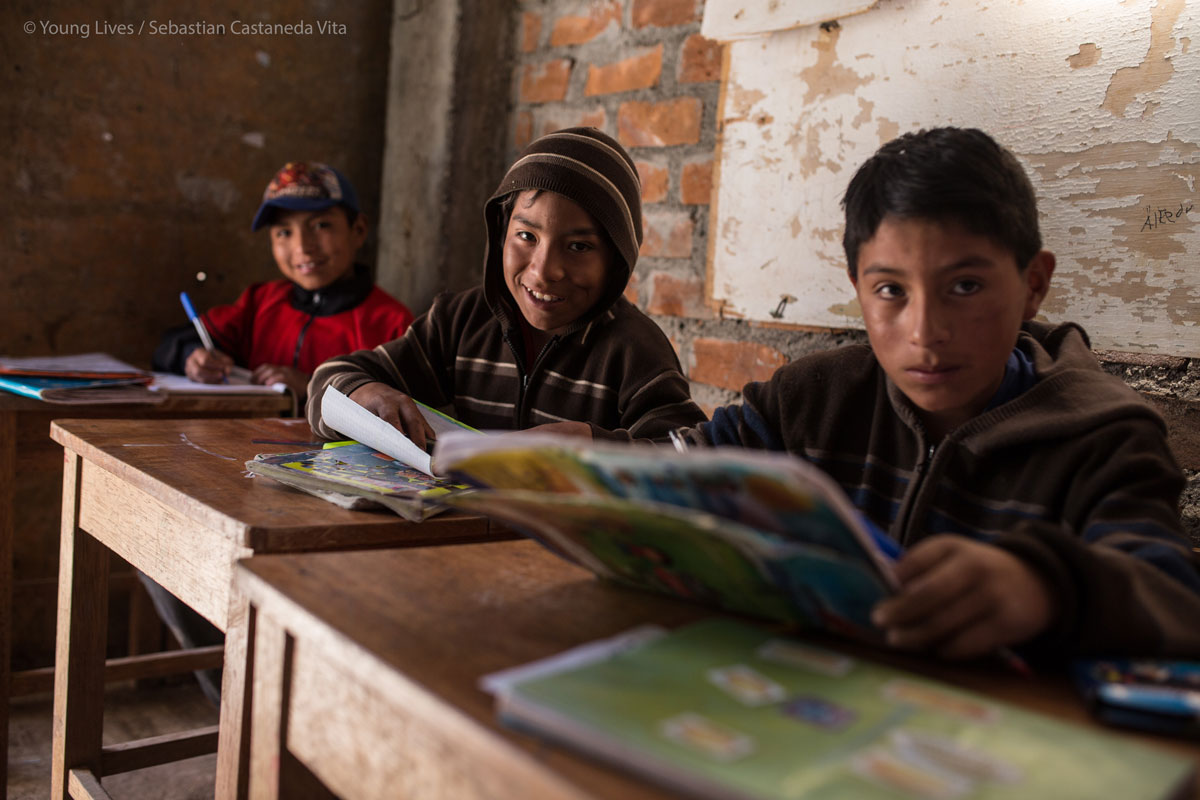 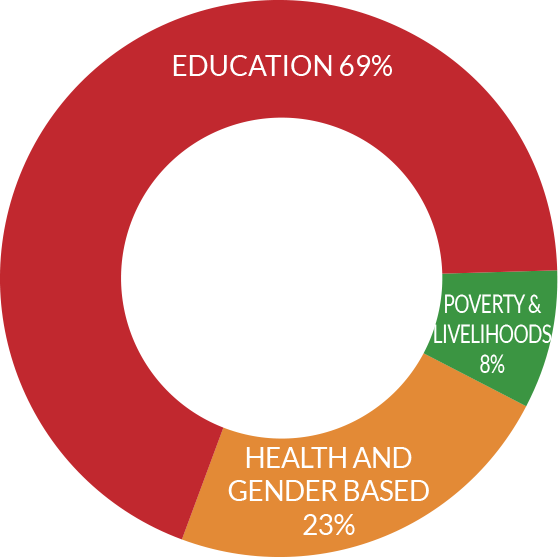 Peru is the third largest country in Latin America by land-mass and has a population of over 34 million. A country of rich and varied heritage, Peru today is a hugely diverse country made up of many different cultural and ethnic groups, religions and languages.

Over the last two decades Peru has made dramatic progress in reducing poverty, more so than any other country in Latin America: between 2001 and 2016 poverty rates fell from 55% to 21%. Worryingly, in 2017 poverty rates increased for the first time in over a decade – 375,000 Peruvians fell into poverty. Peru’s economy has boomed over the past 30 years, driven by the extraction of natural resources. The economy is led by these commodities and other industries are far less developed, concentrating wealth in the cities with very little trickle down through society, resulting in a highly unequal country with high levels of informal employment. 74% of all workers in Peru are employed informally; the majority of whom are women.

One-third of all Peruvians live in the capital Lima, many in sprawling settlements with few public services. Peru’s geography creates its own challenges: dense jungle and high mountains create difficulties to providing public services and developing infrastructure. Iquitos in the Amazon is the largest city in the world that cannot be reached by road. Though the ethnic and cultural variation of Peru is celebrated by the global community, there are high rates of discrimination and marginalization, especially of indigenous groups and women. Peru today is an unequal society where human rights abuses of the vulnerable too often go unchallenged.

Given its economic growth, Peru is now regarded as a middle-income country and much international aid and assistance has been redirected elsewhere in the past decade as development priorities have shifted focus towards Africa and Asia. While the government’s record of providing services is improving, NGOs and international funders have an important role in maintaining the recent progress in social development.

The Old Dart Foundation believes in the transformative power of a quality education and supports the improvement of the public education system in Peru. We also focus our funding on initiatives which work to empower marginalized groups within society, such as projects which challenge inequality, reduce violence against women and promote rights for women and indigenous groups.

Sex crimes account for 20% of prison sentences in Peru 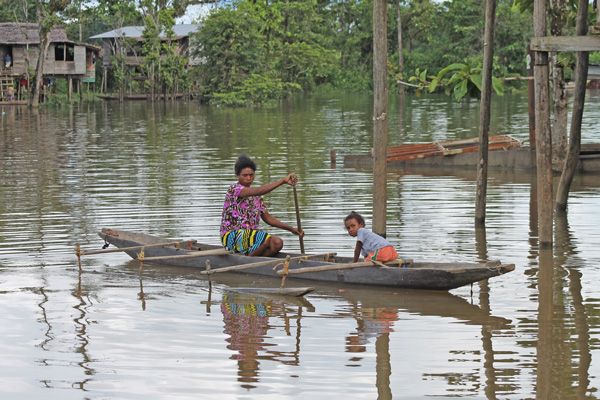 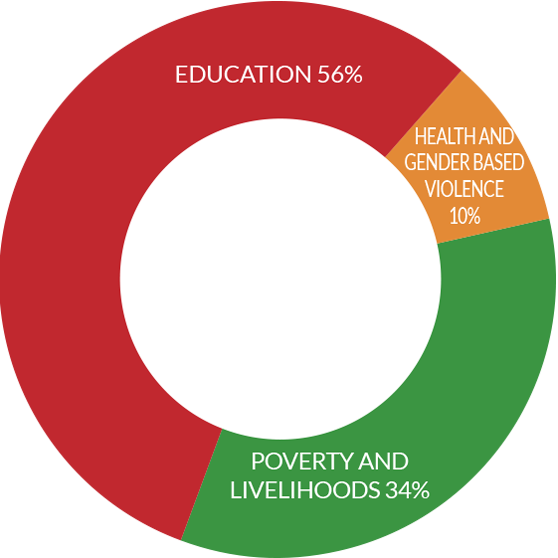 Papua New Guinea (PNG) is a remote country of immense cultural and biological diversity - it is the most linguistically diverse country in the world with more than 700 native tongues. Over 80% of the population live in rural areas and many parts of the country are rarely, if ever, explored by Western visitors.

Despite PNG’s economic boom, almost 40% of the country’s population lives in poverty. Due to a mixture of low resources, inefficiency and corruption the government fails to provide basic services to its citizens – children entering the schooling system today can expect to receive just 10 years of schooling. PNG is rated 153rd in the world on the UNDP’s Human Development Index, on par with low income African countries including Zimbabwe and Rwanda. Papua New Guinea has weak institutions and is rife with corruption at all levels in government and business – Transparency International consider it one of the most corrupt countries in the world, comparable to Russia and Kyrgyzstan.

Human rights abuses are commonplace especially relating to gender inequality, with women and girls treated as second class citizens and subjected to violence and abuse: more than two thirds of PNG women have experienced family violence.

Papua New Guinea’s urban areas are characterized by a lack of law and order and high rates of violent crime. Young men leave rural areas seeking employment opportunities in the city, but with such low levels of economic activity existing and a lack of paid work opportunities, these men are often swept into gang culture. Outside of the cities, rural communities live deep in dense forests, largely practicing traditional ways of life, far removed from the modern world. It is said there are communities in the highlands of Papua New Guinea which have never yet had contact with modern civilization. These communities are hard to reach and function with little to no access to services such as electricity, water and formalized healthcare and education.

80% of men admit committing sexual violence against their partner

75% of the employed population are in 'vulnerable' or insecure roles

Only 9.5% of women have completed secondary school 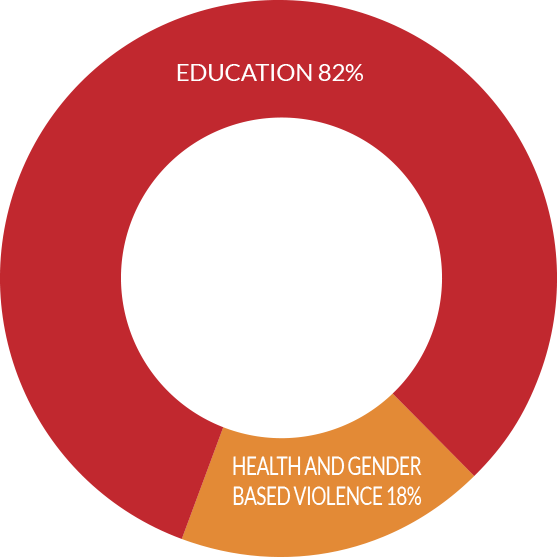 Chile is often described as Latin America’s most stable and prosperous nation. Strong economic growth combined with relative political stability has seen poverty levels fall and human development indicators around health and education rise, compared to neighbouring Peru. However, nowhere on the continent is the divide between rich and poor as wide – Chile is the 15th most unequal country in the world, with almost identical levels of income inequality to Papua New Guinea.

With much of the wealth concentrated in the capital in the financial sector and extractive industries, the millions living in the outskirts of Santiago and in rural towns and villages experience a very different country. Unskilled workers are forced to survive on a legal minimum wage of just $350 a month and even those in skilled professions such as nurses and teachers are chronically underpaid. The social divide is further reinforced by an education and healthcare system where only money can buy quality.

Following major economic reforms in the 1970's and 80's under the Pinochet dictatorship, Chile’s economy is heavily skewed towards private investment in all aspects of life, with weak government services compared to other similarly economically developed countries. Whilst the government provides free healthcare and schools, wealthier individuals can opt out of these systems and instead pay privately. No longer obliged to contribute to these systems through taxation, the public systems are dangerously underfunded and of poor quality; unable to meet the needs of the those which depend on them. Without quality education and healthcare, the cycle of relative poverty for many families continues.

In Chile, the Old Dart Foundation supports community-led organisations working to improve early years education and women’s employment opportunities. We also support in the rehabilitation of people with life-changing illnesses that have been left behind by the public healthcare system. 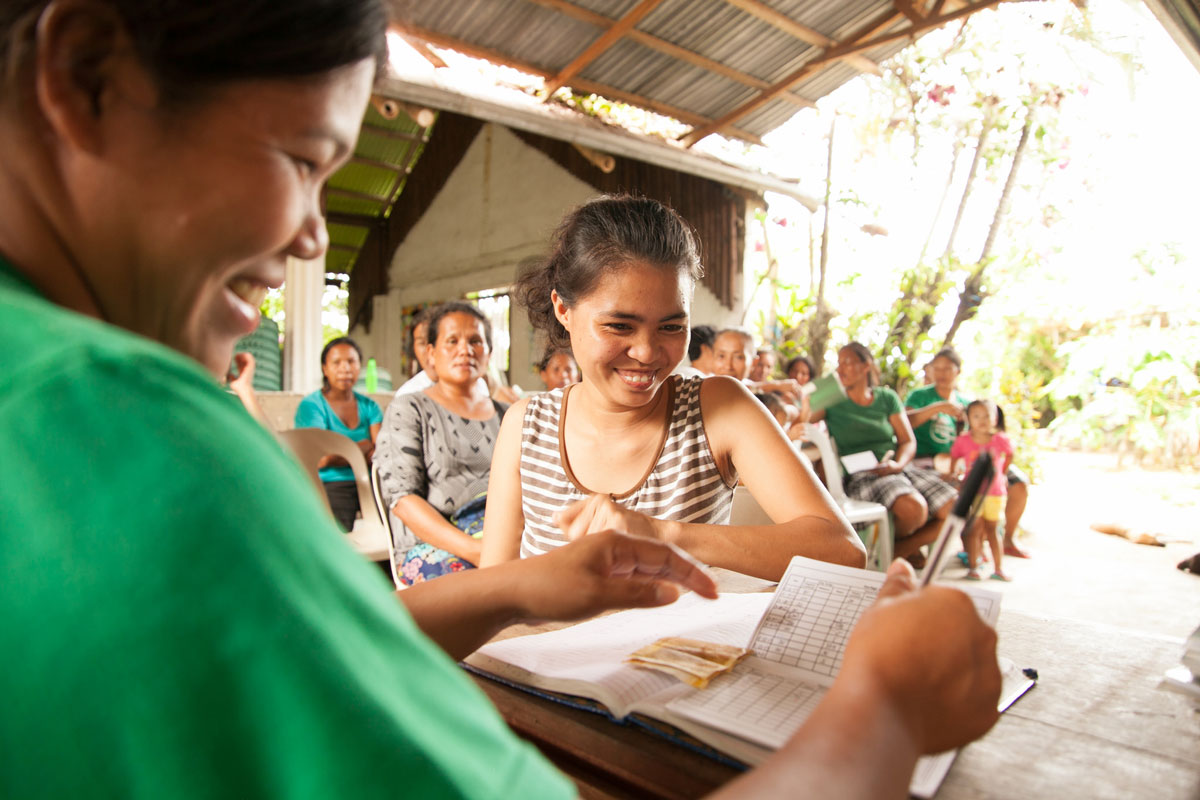 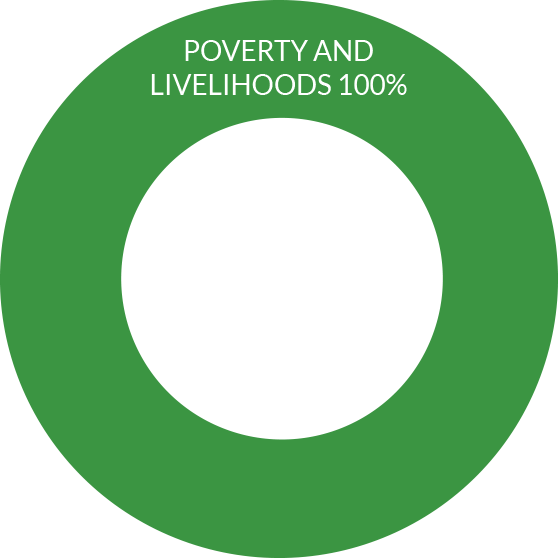 More than 7000 islands make up the Philippines yet most of its booming population live on just 11 of them, often in sprawling urban ‘slum’ or informal settlements such as those on the outskirts of the capital Manila. Whilst poverty rates have reduced over the last decade, around 22% of the population continue to live in poverty. The Philippines is an overwhelmingly Catholic country with a small Muslim minority living in the southern islands. With a strong colonial history with the Spanish and a close relationship with the USA, the Philippines is a melting pot of varied culture.

Prone to natural disasters, many of the international aid agencies working in this country focus on disaster relief in the wake of typhoons and earthquakes which devastate communities and disrupt systems and services, hampering long term development and growth.

High levels of informal employment and weak institutions mean that tax collection as a % of GDP is just 15% in the Philippines, compared to 25% in countries like the United States or Papua New Guinea. A booming population combined with limited government resources has resulted in a great strain on the education and healthcare systems, especially in such a geographically diverse country.

President Duarte is hugely popular among the "masa" - the millions of underprivileged and impoverished Filipinos that make up nearly 75% of the voting population. His promise to clean up the Philippines by ensuring people are ‘scared of the law again’ has proved immensely popular, however, the global community and many Filipinos are alarmed by widespread corruption, abuse of power and extrajudicial killings and forced disappearances.

In the Philippines, the Old Dart Foundation works with organisations supporting the very poorest in urban slums and rural communities to build brighter futures through a holistic approach to early years education, maternal and newborn health and community empowerment. We have also supported health interventions which tackle socially stigmatized conditions such as clubfoot in children.

7 million Filipinos live on under $0.5 per day

8% of working population are in 'vulnerable' or insecure roles

1 in 3 children under 5 are malnourished